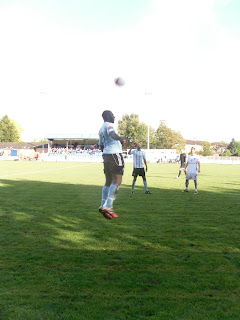 Lewes will have to wait another year before they can have another go at the FA Cup as they fell at the first hurdle to Evo Stick Premier side Chertsey Town on a poor game where Chertsey ran out 4-1 winners against the heavy favourites.

The day started off miserably as the players came out on to the pitch in the drizzling rain, Chertsey in all white with Lewes in a slighlty conflicting colours of blue and white stripes. Chertsey fans were no too confident before kick off "It will be difficult today" was the overall respnonse especially as Chertsey have 3 players from their defence missing either through injury or suspension.

Chertsey had won their last five games and had been scoring for fun with around 4 goals in each game, however they had also been leaking goals like a broken water pipe, somehow managing to be the top scorers and conceded the most so far in the league. Goals were expected in this clash which scouts from at least Reading and one other club were there to see to watch Nanetti who one club noted down "too good for Lewes".

Lewes have scored most of their goals this season by playing a beautiful passing game, however for some reason this was substituted today by an ugly hoof ball system in an attempt to bombard Chertsey with balls over the top, but left Booth and Malcolm playing of scraps and losing interest with the game.

It didn't take long for Chertsey to make Lewes look like fools as from a corner inside ten minutes Phil Page managed to easily get away from returning captain Steve Robinson and power a header in to the net putting Chertsey one ahead. A poor start for the Rooks and one Robinson will be particularly dissapointed with. 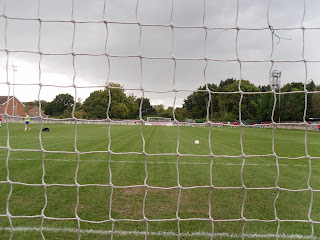 It has to be said going a goal down did inspire Lewes to play some football for a bit, especially via Christian Nanetti, under the watchful eyes of football league scouts he managed to dink his way past two players before being hauled down just outside the right hand side of the area in a cynical challenge which was met deservedly with a yellow card. The resulting free kick saw Nanetti send the ball in on to Hustwicks head where he looked like he might get the equaliser so soon after going behind but his header was straight at the keeper who still had to make a good save as he tipped it over the bar for a corner.

The pressure from Lewes took its toll when the corner was played in before taking a little deflection and finding Matt Somner who scored his first goal for the club with a diving header from the penalty spot to draw Lewes level and renew optimism for the Rooks fans.

However Chertsey were far from disheartened by the equaliser and threatened the Lewes goal again with a couple of chances from the right hand side with the impressive Bennet twice carving open Ciardini and Hamilton before one shot was saved by Robinson and the other cross was cleared away by Kamara. 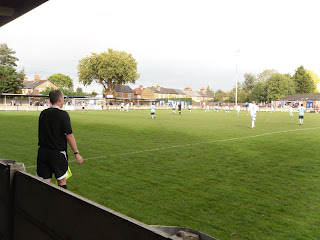 Fans of Chertsey were dmanding Kamara was sent off just a moment later when a crunching tackle was made to look worse than it was due to the slippery conditions but kamara was rightly shown a yellow as he completly missed the ball. The free kick was swung in to the box where it came out and found Bennet on the right hand side free to put in another cross which found its way perfectly for a completly unmarked Page to head in his second of the game, another sloppy goal that the Lewes defence will have to question how he was unmarked.

Again the goal got Lewes going, however it was a bit much for the Lewes side to have to come back again having already come back from 2-0 down on wednesday night, surely they would not be able to do it again.

Again though Lewes searched for Nanetti who again got round his man and this time drove in to the box where he then came under a challenege from Chertsey defender which looked like a clear penalty as did all supporters behind the goal react like it was one, however yet again the referee decided to deny Lewes a penalty claiming that Nanetti had dived or in the words of one very pleasent Chertsey defender he "dived like a C***!" Charming. 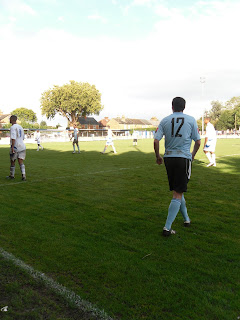 The day really wasn't going Lewes's way and not long after the penalty decision, or non decision, another contraversial moment had gone against Lewes when Hamilton had got infront of Bennet on the ball and was sheilding him away from the ball Bennet then stuck in his leg to try and win the ball back from Hamilton but in doing so caught the leg of Hamilton which was in the air as he was running which caused both players to trip over each others legs, surely a non decision, but one that is usually always given in the defenders favour. However it was not to be for Lewes as the referee decided not to take action uintil he saw the linesman waving frantiacally falgging for a free kick to Chertsey to the amazment of Lewes fans and players and even the odd Cherstey fan who didn't really see where the foul was.

Despite this it didn't stop the Chertsey fans demanding again that Hamilton get a red card as he was the last man. The referee had no option but the send Hamilton off leaving Lewes hort at the back and meaning Ciardini had to fill in at left back meaning Lewes lost some of their threat up front. The decision will particularly hurt Lewes as the decision of "last man" didn't go their way against hendon in the 2-2 draw a couple of weeks earlier.

The resulting free kcik was eventually taken and was well blocked by Kamara keeping the score at bay and giving Lewes a fighting chance as they went in to half time. After all King himself said that a team becomes "harder to play against at ten men."

Howver this old saying wasn't to come true in this case and all hope was lost not long after the break when another contraversial decision went Chertseys way in a day that Chertsey will probably remember for some time. The influencial Bennet came forward again and easily beat Ciardini filling in at left back before stumbling but managing to smash a shot in from a tight angle which crashed in to the cross bar then off the post, no one thought it had gone in until, this time the other linesman being the guilty prosecuter as he flagged for a Chertsey goal effectivly killing off Lewes's FA Cup dream.

Chertsey again continued to attack but the second half felt more like a formality than an interesting spectacle with each Chertsey attack just being one meaningless trip out to the Lewes penalty area. The age old joke came out again as a delighted young Chertsey supporter pointed out that Lewes should just call themselves "loose". It felt like old times again, and by old times I mean Keehan, Ibbo , O'Shea era putting a doubt over Lewes and whether they are really title contenders or just pretenders.

Chertsey heaped the misery on to Lewes fans just gone the hour mark after Max Hustwick had been replaced by Ian Draycott to leave Lewes with just three at the back and leave Lewes suspect. A ball in to the box from the left hand side fund the outstanding Bennet who beat Ciardini too easily in the air to put the ball past Robinson for the fourth time in the game in an embarrising display by Kings men.

Lewes then through forward too little far too late with a couple of half chances being spurred. One wayward shot by Aaron Watson when he should have done better before Dwayne Lee smashed the ball aqwardly over the bar from a good position just outside the box.

To make matters worse for Lewes Matt Somner had to be replaced by Adelakun due to injury after half time and with Hamilton already out with a suspension after his straight red it could be a difficult few games for the Rooks especially as they now have to play at home to Cray in the league, Cray who are in second place and beat Hastings 3-0 in the cup to ensure they are through to the next round.

There is now a worry going around the Lewes camp that players will have to be released as they board were relying on money coming in from the FA cup for the budget this season, especially when they were planning for 1000 crouds every week and the average has been merly half of that. Better will be expected of the rooks next week. 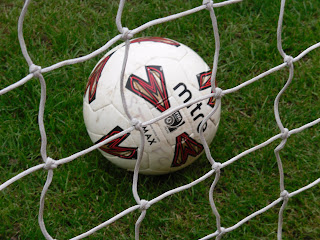 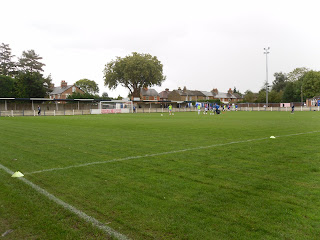 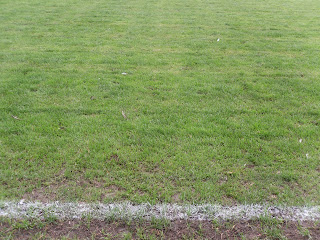 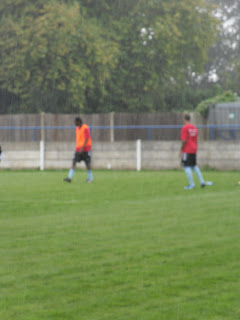 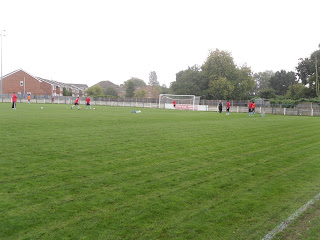 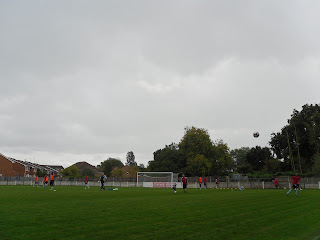 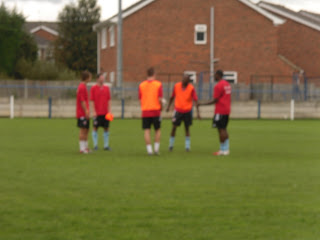 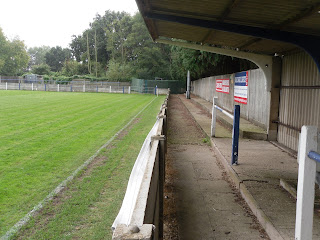 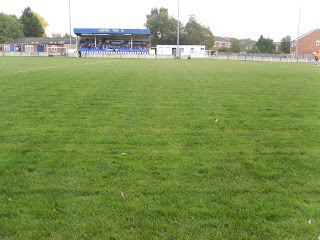 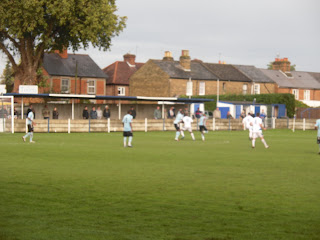 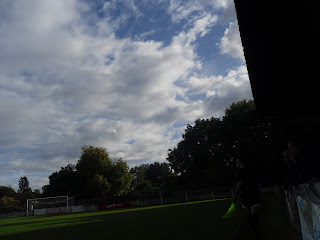 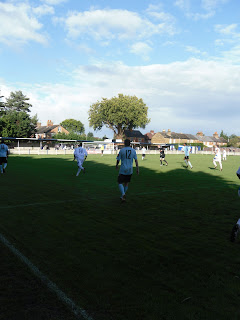