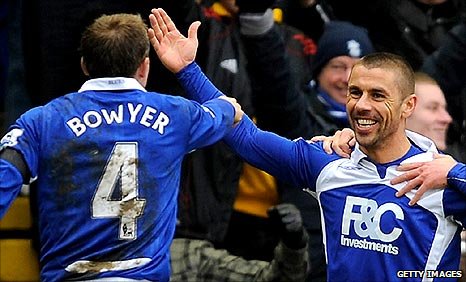 Birmingham have today released news that key players, Seb Larsson and Lee Bowyer have left the club after being unable to save them from falling int to the championship, despite winning the carling cup.

But even more importantly to fans in Sussex, they are also letting go of stiker Kevin Phillips who has been heavily linked with a move to league 1 winners, Brighton and Hove Albion. It is thought that now Phillips is a free agent he will join Brightons attach as has Hoskins who signed from Bristol.

Brighton have already signed Hoskins and are also believed to be looking in to the possibility of signing Manchester United striker, Michael Owen. Manager Gus Poyet has explained that he needs three new strikers with Hoskins being one of them the rumours are spreading round that Phillips and Owen are the other two, both have played in the Premier division this season.

It was already known that Brighton needed new strikers as they recently lost top goalscorer Glenn Murray to bitter rivals Crystal Palace which has brought a bad feeling with Brighton supporters, hence the picture.

Birmingham can also confirm that respected defender Stephen Carr has signed an additional one year contract and will stay with the club during there minimum of a year in the championship.


"We have discussed strategies and player movements and policies," said Birmingham's acting chairman Peter Pannu.
"Suffice to say there is by and large consensus in the way we believe we should proceed."
Posted by Joe Betts at 07:57