Two key players for Arsenal; Cesc Fabregas and Samir Nasri are both on the verge of completing moves away from the club according to Arsenal manager Arsne Wenger. They will move to clubs Barcalona and Manchester City respectivly.

All the funds from these sales will be made available for Wenger to spend on new players, he is likely to replace the two midfielders as well as signing a much needed defender to make the wobbly gunners defence more stable. Scott Dann, Phil Jagielka and Gary Cahill are just some of the names being linked to the London club.

Arsenal had hoped to gain £40 million for Fabregas but after the latest take it or leave it offer, they felt that they would have to let him go with the champions league registration coming up sson, and Wenger is keen to get the deals done before the start of the season. Fabregas will be due £4 million compensation from Arsenal, £1million for every year left on his contract, but it is believed that he will not demand that in order to make the deal easier.

Fabregas joined Arsenal from Barcalona in 2003 and Barca have been attempting to get him back dince 2010, in a deal that has been ridiculously dragged out and is now finally going to be wrapped up. 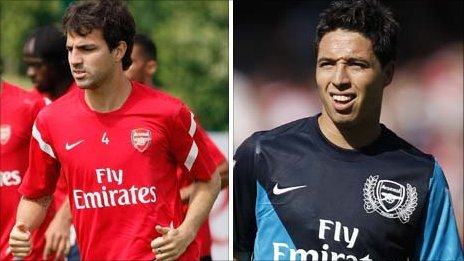 Nasri can move on a free next year, which Wenger stated he would allow him to do, but City want him now and would rather pay the £22 million for this season rather than wait till next summer when they would have the chance to get him on a free providing Arsenal don't talk him in to signing a new deal.